The Combined Heat and Power Plant Cost Allocation Methods: An Overview and a New Method Based on the Linear Steam Turbine Characteristic Curve. Section 1. A cost allocation problem statement 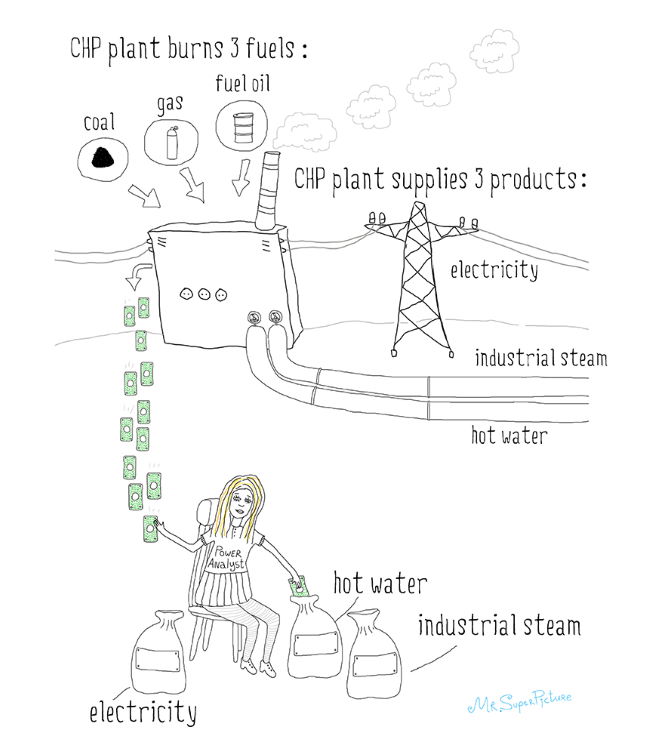 This paper discusses the cost allocation problem for combined heat and power generation. Firstly, I provide a review of the methods most frequently used in Russia and other countries with developed electricity and heat markets. Secondly, I develop a new thermodynamic method for cost allocation for combined production based on a linear steam turbine characteristic curve. Finally, the general principles of comparison for the observed allocation methods and their numerical results have been developed and applied and the most effective methods are identified.

I am grateful to Dr. Anatoly P. Karpenko, Professor of Bauman Moscow State Technical University, for his assistance in editing the manuscript.

Preface to the English version

The original paper was published in the Russian language in Science and Education of Bauman MSTU journal in 2016. The present English version was published on the personal website of the author in January 2021. For reference purposes, please use I. Chuchueva The Combined Heat and Power Plant Cost Allocation Methods: An Overview and a New Method Based on the Linear Steam Turbine Characteristic Curve, Science and Education of Bauman MSTU, 2016, №2, P. 135-165.

The English version has been adopted for foreign readers under the following terms.

I added a few notes that will help foreign readers to go through electricity market terminology. The basic difference between Russian and European (other developed) markets is the trading possibilities: in Russia, only day-ahead and imbalance bidding is available for participants. If a power plant doesn't participate in system balancing (imbalance phase) the deviation between the day-ahead schedule and actual production will be traded at the imbalance price. There is neither intraday auction nor continuous trading in Russia. Such market design puts additional pressure on the day-ahead bidding procedure.

In Russia, Combined Heat and Power (CHP) plant’s day-ahead and imbalance bidding prices are connected to their technical efficiencies by market regulation. Thus, usually, the fuel rate (fuel consumption by unit of supplied product) calculation problem is stated. In countries with developed electricity markets, the cost allocation problem is usually stated. These two problems are twin brothers: once I have a fuel rate value for a certain product, I can calculate the cost of this product. An English version is discussing the cost allocation problem meanwhile the numerical comparison is done for fuel rate values in accordance with the Russian original.

The important feature of the paper is its appendix, Chuchueva-CHP-Cost-Allocation-Eng.xlsx (xlsx-appendix). The file contains a transparent step-by-step implementation of all examined methods for a certain CHP plant operation mode. The detail of CHP plant loads and operation mode is in the sheet “CHP Operation Mode” and the fuel rate calculation and cost allocation are in the sheet “Methods.” In literature, notations of different methods are different and sometimes cumbersome. The goal of this paper and xlsx-appendix is to bring all notations for all methods to a unified background and, through that, make the comparisons easy and straightforward. Any coefficients or factors are used in methods are denoted with γIND, its index refers to the details of the coefficient or factor.

Note, some of the references are available in Russian only.

A Combined Heat and Power (CHP) plant simultaneously produces several forms of energy: electricity, industrial steam, and heat in the form of hot water. The combined production of heat and electricity is more efficient than separate production: by 37% according to [1], by 25% according to [2], and by 30% according to [3]. The reduction of the total fuel consumption and, as a result, the total cost in combined mode production compared to separate mode is called benefit [2], [4]. Fuel cost is a variable CHP plant cost. Fixed CHP plant costs like capital, labor, etc. are not discussed in the present research; for detail of fixed cost allocation see paper [2].

In Russia, despite the ten-year period of the Wholesale Electricity and Capacity Market development since 2006, CHP plants market bidding prices are still tightly connected to their technical efficiency by market regulation [5]. Moreover, in Russia, the least correct thermodynamic method — the so-called physical method — is officially applied to determine CHP plant technical efficiency [3], [4]. At the same time, neither of the economic methods for cost allocation is being applied for the development of market bidding strategies [5].

The objectives of this work are as follows:

In the review part of the work, the five thermodynamic methods that are most frequently applied are considered [1], [2], [3], [4], namely:

A new method for cost allocation based on the linear steam turbine characteristic curve is proposed in this paper. This method has two advantages. Firstly, it allows us to consider the differences between various forms of energy, for example, steams with different parameters in CHP plant products [4], [8]. Secondly, it is simple and requires a small amount of input data.

The principles for comparing the efficiencies of each of two groups of methods, thermodynamic and economic, are specified. For a certain steam turbine operation mode, both fuel rates and costs are calculated using each of the mentioned methods. The comparison of the efficiencies of the thermodynamic and economic groups proves that the most effective thermodynamic methods are the exergy method and the work method. The most efficient economic methods are the benefit and risk-sharing method and the method of an alternative way of heat supply.

An important result of the study is the conclusion that the physical method, i.e. the official method for cost allocation adopted in Russia, is the least effective thermodynamic method. The widespread application of this method and its rigid regulatory connection with the day-ahead and imbalance bidding prices impede the electricity and heat market development in the country.

The work has the following structure. The first section contains the problem statement for both the fuel rate calculation and cost allocation. The second section contains a review of the methods. The review consists of two parts: in the first part, I examine the methods applied in Russia; in the second, I examine the methods applied in other countries with developed electricity and heat markets. The third section introduces the new cost allocation method based on the linear steam turbine characteristic curve. In the fourth section, I develop the principles for comparing the efficiencies of the thermodynamic and economic methods and order the methods from most to least efficient within the group. Finally, the numerical results of the methods are analyzed.

The amount of electricity generated by a CHP plant is determined by the market mechanism based on the day-ahead and intraday bid a CHP plant has made [5]. In accordance with the wholesale electricity market of Russia's rules, the CHP plant day-ahead and intraday2 bidding prices should be estimated based on the equivalent fuel rate value for one MWh supply [5], [9]. In other words, the power exchange controls the CHP plant bidding prices and is allowed to request a technical foundation for “weird” values (usually too high). The money income for the generated electricity is regulated by the wholesale electricity market rules [5]. The volume of electricity for its own usage, denoted as \[E^{AUX}\], is being bought3 on the market [5].

2 In Russia, the intraday market is the pure balancing market where power plants offer their change of power production to the System Operator to balance supply and demand. Neither GE/GB style intraday auction nor continuous trading phase are applied in the country. The deviation between the day-ahead schedule and actual production and consumption is being traded directly by the imbalance price.

3 In Europe, a net position is being traded. Completely opposite, in Russia, all power plants including CHP plants sell their gross supply and buy their auxiliary services supply at the same price. These two trades provide transparency of power plant operation.

The bottom index M refers to medium-pressure steam. As a rule, a medium-pressure steam of 6–35 atm and a temperature around 150–2500С is consumed by industrial enterprises for technological needs. That's why it’s usually referred to as industrial steam. A steam supply schedule is defined in the contract between a CHP plant and an enterprise and is mandatory for a CHP plant. The payment for the supplied steam is made under the terms of the contract. The volume of the CHP plant’s own usage of industrial steam is denoted as \[Q^{AUX}_M\].

The bottom index L refers to low-pressure steam that heats up the water. The water of a temperature 50–1200С is consumed by households and enterprises. The water heating schedule is calculated using the outside temperature special dependency [10]. The lower is the outside temperature, the higher is the CHP plant's heat load. Similar to industrial steam, the heat production schedule is mandatory for CHP plants. In Russia, the money income for the supplied heat is based on an average monthly equivalent fuel rate for one Gcal of supply. The tariff is approved by the Federal Tariff Service for a given year [11]. The heat trade in other countries is observed in [2]. The volume of the CHP plant's own usage of hot water is denoted as \[Q^{AUX}_L\].

As we may see from above, for Russia, two out of three product costs are based on the fuel rate value. There is a price negotiation between counterparts only with industrial steam supply. This is the reason for splitting the cost allocation problem in this paper into two steps: first, the fuel rate is calculated, second, cost allocation is completed. To harmonize numeric estimations, for economic methods the same approach is implemented. In other words, for all the methods, firstly, the technical side of the problem is solved, and secondly, the economical one.

Where \[B_E, B_M, B_L\] are the parts of the total consumption of equivalent fuel \[B\] needed for the generation of electricity, industrial steam, and heat, respectively. The values of \[B_E, B_M, B_L\] should meet the fuel balance:

The main input data for the calculation are:

The scope of additional input data depends on the applied method (section 2).

MWh is used as a unit for the values of the CHP plant loads; tef (tons of equivalent fuel) — for the consumption of equivalent fuel. Thus, the fuel rates \[b_E, b_M, b_L\] are measured in tef/MWh; if necessary, values can be converted into kgef/MWh, gfe/kWh, gfe/GJ, kgef/Gcal, EUR/MWh, EUR/kWh, and several other units [4], [9].

In the second step, the supplied product cost per unit is obtained by multiplying equivalent fuel rate values \[b_E, b_M, b_L\], tef/MWh, and equivalent fuel price, EUR/tef. This step is performed in the xlsx-appendix to the paper. Numerical analysis of the methods is done based on fuel rate values in tef/MWh. The pretext is given in the Preface to the English version of this paper.